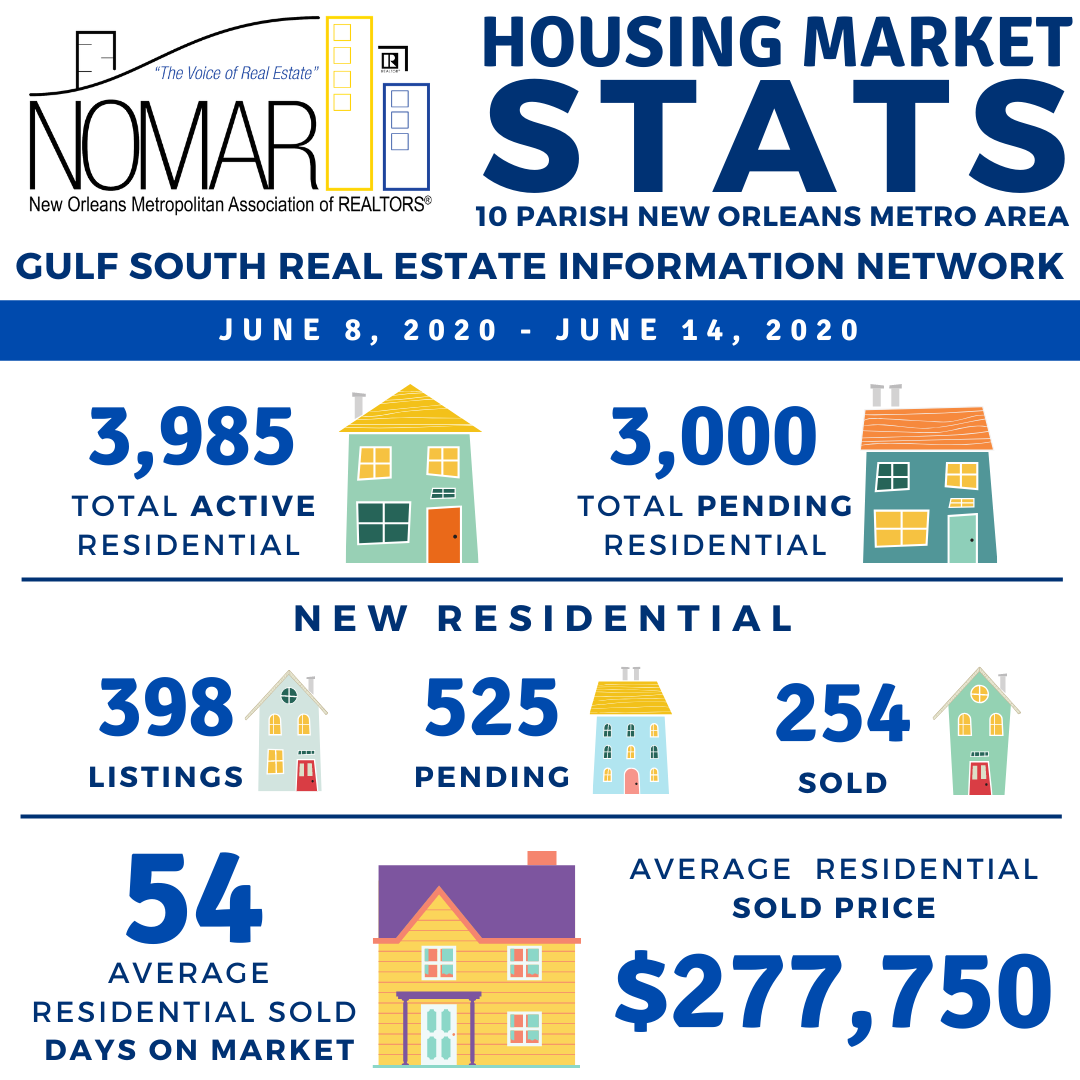 Constant, sustained employment growth at a 6,000 to 12,000 jobs per year pace has increased metropolitan area-wide housing demand.  The increase of 6,900 jobs in 2019 followed a year of a nearly 12,000 job gain pace (January 2017). It is employment growth that drives economic activity forward.  The gains in the New Orleans Metropolitan area were widely dispersed over this geography.

Housing sales are grouped by five digit zip code.  These are sales with a REALTOR® providing sales services and not owner sold properties.  Generally, no more than two units compose the property sold.  Condominiums and Townhouses are also generally excluded.  These are all residential housing units without commercial portions and generally without a commercial first floor for the property.  The reported information from MLS is the address, date of sale, five digit zip code, living area, price paid, and climate controlled living area.

The average sales prices at zip code level, living area, sales price per foot of living area and number of houses sold are presented for first half of 2019 and 2018 (half year data).  I have no right to distribute data from GSREIN except with their permission.  GSREIN aggregates the housing sales for specific time periods, half years or years into average sales price and average price per foot of living area for entire zip code areas. More detailed analyses can only be provided by written permission of GSREIN and the New Orleans Metropolitan Association of REALTORS®.

Due to the extensive damage caused by Hurricane Katrina in 2005, geographies with large standing stocks of non renovated, damaged houses were for the last 13 years broken into two categories. Average to excellent condition or new houses were separately analyzed as being indicative of typical house price levels which could be compared to prior years of typical housing in that geography. Houses in zip code areas with substantial flood-caused housing damage described as being in Fair or Poor condition were separately analyzed and labeled.  Starting with first-half 2018 the Fair/Poor and Average or better condition house sales have been combined with no condition adjustment.

Usually these Fair/Poor condition houses sold for prices below the average price of houses which had been renovated or were in average or better condition. No field inspection effort to verify the condition of these houses occurs by this analyst before including them in the Damaged or not-renovated category.  The REALTOR® condition and geographic location were the basis of the categorization.  This report from GSREIN combines all condition levels together with no separate report for poor/fair condition housing.

Price appreciation is measured by the change in sales price per foot of living area from one  6-month or 12-month period to the next (oldest sale – newest sale divided by oldest sale) .  Mid-year 2018 price change was measured by comparing 6-month periods (first half of the year).  Sold house sizes vary substantially between zip codes and also within the same zip code over time. The average sales price per foot of living area removes shifts of house prices due to simple changes in sample composition due to substantial shifts in housing living area from one time period to the next. The New Orleans Metropolitan Association of REALTORS® and the Gulf South Real Estate Information Network aggregate the housing sales by zip code and time period.  Dr. Wade Ragas, PhD MAI SRA, describes the factual results of these data tabulations by zip code area.

In the first five months of 2019, the New Orleans Economy gained 6,900 jobs while the state gained only 1,900 jobs (laworks.net, LMI Bulletin).  The graph below traces the patterns of employment in the New Orleans Metropolitan area from April 2016 to May 2019.  New Orleans has been in a strong period of economic growth since July 2017.

Prices rose in nearly every parish. Within the 8 parishes of the Metro area the typical price increase was between 2% and 10%.  Price appreciation has continued throughout the metro area.  The inclusion of all Fair/Poor condition housing lowered the 2017 and 2018 prices somewhat for Orleans, St. Bernard and St. John. However, as of 2019 there are not enough Fair/Poor condition sales to substantially affect the housing price trend.

Housing prices were unchanged in 2019 to a +0.1% change.  Unit sales volume remained strong at over 1,530 in 2018 versus 1,623 in 2019.  The large price gains of the recent past are beginning to occur in the suburban markets. The average house price per foot of living area rose to $177 per foot.  Large parts of Orleans Parish had small declines in housing prices. 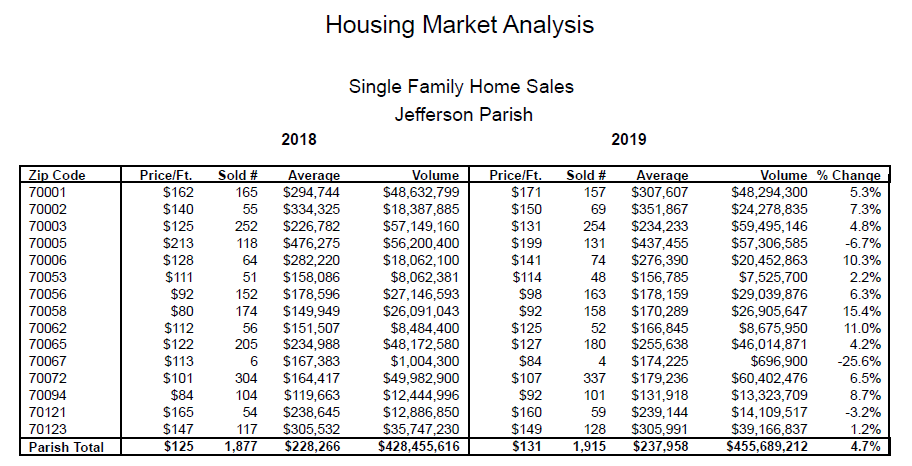 Prices fell by -2.7% in 2019 in Tangipahoa.  Sales volume remains a strong 731 units in first-half 2019.  Living areas are stable at about 1,800 square feet per house in 2019.  Job growth Upriver of New Orleans from St. Charles to Iberville is strengthening the demand for housing in Tangipahoa.  When redevelopment of Avondale occurs, there should be a strong surge in housing demand for Southern Tangipahoa.  The average price per foot of $99 is very affordable for home buyers. Prices fell 2.7% in 2019.

The rural and urban portions of St. Charles Parish generally had increases in average price per foot of living area (6.2%).  The urbanized areas such as Ormond (zip code 70047) and St. Rose (zip code 70087) remained steady at slower rate of price increase.  The majority of the house sales were in the urban areas.  The average overall price per foot in 2019 was $119 with a 6.2% rate of price increase.  Again, this was an affordable housing market similar to Jefferson and St. Tammany.

The rate of house sales was steady at 159 per year in 2019.  The average sales price per foot at $94 was 2.7% higher in 2019 than the $91 per foot price level in 2018.  Prices remain more than 20% below St. Charles Parish levels and nearly 30% below East Jefferson. This is a parish with affordable housing and large-scale nearby job growth along the River.  It is priced similar to Tangipahoa Parish.

A complete hurricane protection ring levee system now protects St. Bernard.  The average house price rose by 10.6% to $107 per foot in 2019.  This is a price in between Tangipahoa and St. Charles Parish prices. Young households willing to engage in redevelopment are being attracted to Arabi and to the nearly fully redeveloped areas of Chalmette.

Housing volume unit sales reached 214 units in the first half of 2019.  This is more demand than in either St. John or Plaquemines, but less than all the other parishes of Metro New Orleans.

Fewer houses are still being sold for redevelopment.  These are still being priced near $50 per foot (still damaged), which allows a $50 or more per foot renovation cost and final price of $110 per foot for a renovated house. Substantial further redevelopment is likely.  The $174,000 average house price is attractive to first-time buyers.

The Belle Chasse zip code of 70037 has historically been the only geography analyzed in Plaquemines in this study, due to lack of sales volume south of Belle Chasse.  The 110 REALTOR® sales per year produced a 5.7% rate of price change with an average price per foot or $139 in 2019. It is a more expensive housing market than Jefferson or Algiers.  It is a small market with high-quality housing.  Upper income households have been attracted to Belle Chasse by large lots and trees and an excellent school system and proximity to the Mississippi River Delta for oil and gas industry jobs.